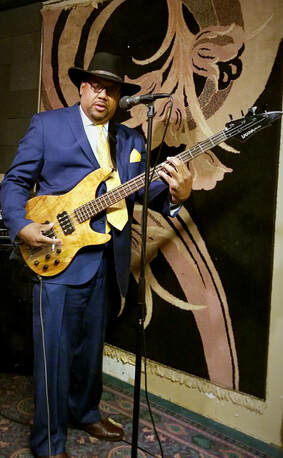 James Barnes aka “JB” was born in Cleveland, OH and migrated to Newark, NJ at the age of 4. His family moved to Westfield, NJ during the mid 60’s where he attended school. He graduated from Westfield High School. JB started his musical interest early. Growing up in the church, his mother was an Evangelist and she preached the gospel along with being a great singer. His brother was also a singer who started a late 60’s vocal group. JB first picked up the bass around the age of 15. His then brother-in-law was the bass player for “The Roy Ayers Ubiquity group.” Hanging out with him had a strong influence which lead JB to play the bass. Although JB never had any formal training, he learned to play by ear and his brother-in-law showed him some licks on the bass. JB played in several bands throughout the late 70’s and early 80’s playing mostly original songs and grooves. During the early 80’s, he began to play with a drummer named James McCauley and with their unique style of playing, they developed the “Funk Fusion” sound which no one else was doing during the time within the Plainfield/Westfield area. In 2008 he joined a band called “Traveling in Stereo” and recorded a CD along with performing several live shows with the band. The Blues was calling his name. JB continued to listen and be influenced by the Blues. He then reunited with his old friends Barry Holmes and Tommy Doud forming the band BBD.
​
JB was heavily influenced by all kinds of music. Several of his influences were Miles Davis, Stanley Clarke, Jaco Pastorious, Jimi Hendrix, Muddy Waters, Buddy Guy, Weather Report, Mahavisnu Orchestra, Billy Cobham, John Coltrane, Tony Williams, Allman Brothers, the Motown sound, Sly and the Family Stone, the Who, The Stones, Led Zeppelin and so many others it would take up the rest of the page to list them all. James has been inducted into the New Jersey Blues Hall of Fame during 2016. 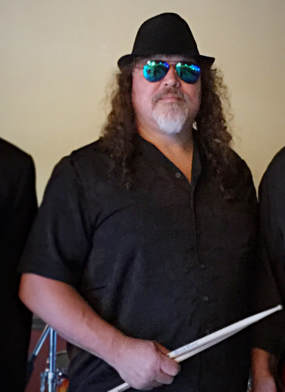 Tommy Doud aka Tommy “Earthquake” Doud was born in Newark NJ. Tommy started playing drums at the age of 11 and by 13 he was playing songs by many popular bands. At the age of 17, Tommy was taught how to read and write music by the legendary Jazz drummer “Carl Wolfe”. By the age of 20, Tommy played several hundred shows around the Tri-state area. During the 80’s Tommy played in several cover and original bands playing 100+ shows per year. Tommy quickly became a drummer in “top demand”. During 1986, he opened “Earthquake Studios” providing multi-track recording, drum lessons and rehearsal space to many bands large and small. Earthquake Studio is one of the longest running studios in central NJ. From 1986 to 1991, Tommy was the drummer for Sky Clad Recording Artists, “Pierce”. He toured the US playing over 200 shows per year and released 2 albums with the group. Tommy also performed with the bands, Shotgun Alley, Rattlebone, Victory Gin, and TKO recording artists Niblick Henbane where he recorded the LP “Go Away”. Tommy’s most recent projects are with Electric Storm, Legends of Vinyl, and the Mike Bino Project. Tommy has performed 3,000+ shows since 1969. Tommy is a great influence on the younger drum students to which he continues to provide lessons.
​
When Tommy “Earthquake” Doud is behind the drums, the room shakes and the groove stands out. Some of his many influences are Buddy Rich, Billy Cobham, John Bonham, Mitch Mitchell, Keith Moon, Elvin Jones, Dave Weikel as well as many bands such as Metallica, White Snake, AC/DC, and Cream just to name a few. Tommy has been inducted into the New Jersey Blues Hall of Fame during 2016.